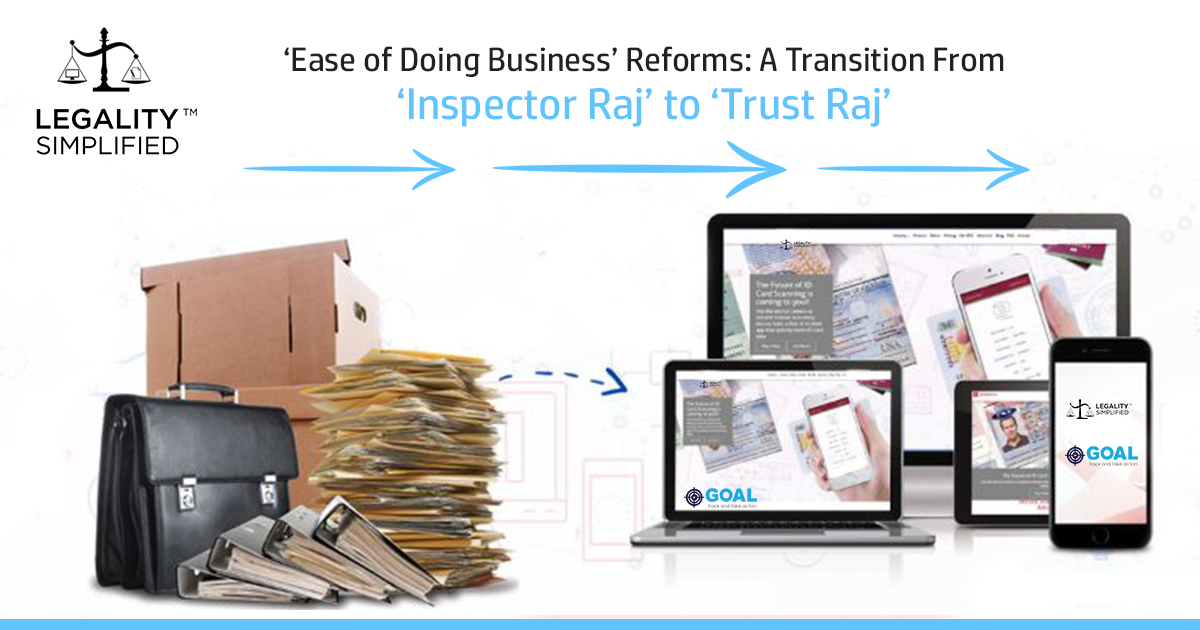 The Industrial law regime in India characterised by over regulation & supervision of factories and industrial units by the Government, is infamously called ‘inspector raj’. This legal trend was rampant in 1970s and 1980s. After India embarked upon the path of economic reforms in 1990s, Inspector Raj has gradually started to fade away. The system of Inspector Raj is heavily vilified as it significantly drops the overall productivity of a business and it further complicates the conduct of any business. Therefore, the abolishment of this system has been a longstanding demand of the industries. By scraping it and replacing it with alternative methods like self-inspection, e-inspection or even third-party inspection, ‘ease of doing business’ can be remarkably improved which is crucial for the country’s ‘Make in India’ mission.

The timeline of transition from inspector raj to self-inspection, e-inspection and third-party inspection regime

On 29 August 2014, the Union Ministry of Environment, Forest and Climate Change constituted “High Level Committee” (HLC) under the chairpersonship of former cabinet secretary TSR Subramanian to review Environment and Forests Laws. The committee report recommended incorporating the principle of “utmost good faith” into the legal system, which would also help to reduce inspector raj. Following this, the ministry of environment, through an office memorandum dated 31 December 2014, tasked a committee with drafting rules that would enable industries to self-certify and self-regulate their environmental efficiency, rather than being subjected to inspection and scrutiny by state environmental authorities. As per the memorandum, the ministry has been “reviewing the issues relating to the granting of various clearances in to industries and developmental projects with the intention of improving ‘ease of doing business’”.

The Central government on August 2015 suggested the constitution of autonomous factory regulator called Occupational Health and Safety Board of India (OHSBI) through the Factories Amendment Bill, to implement, oversee and regulate different aspects of manufacturing companies. The labour ministry’s decision to establish this regulator has been criticised by experts and industry representatives as detrimental to the manufacturing sector and could herald the return of the inspector raj under a new name.

In 2016, Confederation of Indian Industries (CII) in its white paper titled ‘Inspections and Regulatory Enforcements for Micro Small and Medium Enterprises (MSMEs) in India’ stated that the factory inspection system in India needs a complete overhaul to bring India among the top 50 countries in terms of ‘ease of doing business’ in the next two years. According to the report, the excessive number of inspections in India weighs down on the competitive advantage and the ‘ease of doing business; in India.

In 2016, Reserve Bank Governor, Raghuram Rajan stated that India has abolished the ‘licence raj,’ but the ‘inspector raj’ still exists to some extent. He also suggested a system of self-certification for industries, with some checks on the part of the authorities to prevent any misuse, and that the said regulations should be for the betterment of the sector, not to hinder the growth of entrepreneurs. He believes that light regulation is critical in the small and medium business market, and that heavy regulation does not always allow for quick entry and exit, which is why people avoid it.

As the government was facing criticisms for lack of speedy measures for doing away with inspector raj, the Finance Minister, in the 2018 budget speech clarified that: “To carry the business reforms for ease of doing business deeper and in every State, the Government has identified 372 specific business reform actions. All States have taken up these reforms and simplifications in a mission mode constructively competing with each other. Evaluation of performance under this programme will be based on user feedback.” The central part of this programme is implementation of a computerized central random inspection system wherein allocation of inspectors is done centrally, the same inspector is not assigned to the same unit in subsequent years, prior inspection notice is provided to the business owner, and inspection report is uploaded within 48 hours of inspection. As per a press release dated 17 February 2021, 15 states have completed implementing these business reforms.

During these three years, several authorities like Central Pollution Control Board (CPCB), Food Safety and Standards Authority of India (FSSAI), Employees’ Provident Fund Organization (EPFO), Employees State Insurance Corporation (ESIC), Department for Promotion of Industry and Internal Trade, Central Board of Direct Taxes (CBDT), Central Board of Indirect Taxes & Customs (CBIC) etc., through a number of notifications have moved away from inspector raj in areas of law like food laws, environmental laws, labour, laws, and tax laws. These legal updates involve the following:

On an additional note, the Covid-19 crisis has sped up these transitions by further encouraging e-inspections. This is evident from the covid relaxation measures issued by the abovesaid authorities. For instance, FSSAI allowed State licensing authorities to conduct e-inspections for any grant of licences and registration of Food Business Operators (FBOs). These FBOs were allowed to submit photos/videos or do live-streaming of their units or premises to the licensing authorities for the purpose of inspection. FSSAI has also directed authorities that no routine inspections are required to be done except in case of high-risk food products viz. Milk and milk products, slaughter houses, meat and meat products etc.

Furthermore, there have been reports that anti-social elements are defrauding companies posing as inspection authorities. Such incidents have also has brought to light the flaws in the inspector raj system.

However, the major impediments to a smooth transition from the inspector raj regime include the International Law Obligations apart from the political and trade unionist factors. India has ratified the International Labour Organisation’s Labour Inspection Convention (No.81),1947. Some of the stringent principles of the convention include proper inspection regime for enforcement of labour rights.

Times have compelled India to take the path of economic reforms in 1990s and our inexorable progress in this direction continues. For India to reach its absolute potential, it is important to remove all hurdles that come in the way. Various agencies have already eased inspection rules by scrapping the Inspector Raj system and replacing it with self-inspection, e-inspection, or even third-party inspection in order to reduce the inspection burden on businesses and promote their development. Taking the route of ‘ease of doing business,’ one can unlock huge potential at a time when whole world is seeking new investment opportunities.

With more outcome-oriented action on ease of doing business, huge momentum to India’s domestic and overseas investment can be imparted. For a self-reliant and globally competitive India, a combination of facilitative reforms for ease of doing business and effective monitoring mechanisms for already-implemented schemes and programmes are the need of the hour. In this sense, it can be said that ‘Ease of Doing Business’ is the roadmap to India’s mission of self-reliance.